SSD and other types of PC hard disk.

+86-755-33583558 Ext 603 [email protected]
1. IDE (parallel port hard disk)
The full name of IDE is "integrated drive electronics", that is, "electronic integrated drive". The transmission speed of IDE is 100 or 133mb / s. its original meaning is the hard disk drive that integrates "hard disk controller" and "disk body". By integrating the disk body with the controller, the number and length of the hard disk interface cables are reduced, the reliability of data transmission is enhanced, and the hard disk manufacturing becomes easier, because the hard disk manufacturers no longer need to worry about whether their hard disks are compatible with the controllers produced by other manufacturers. For users, hard disk installation is also more convenient. The interface technology of IDE has been developing continuously since its birth, and its performance has been improved constantly. Its low price and strong compatibility make it irreplaceable for other types of hard disk.
IDE represents a type of hard disk, but in practical applications, people are also used to use ide to refer to the earliest type of IDE hard disk ATA-1, and then developed into more types of hard disk interfaces, such as ATA, ultra ATA, DMA, ultra DMA and other interfaces belong to IDE, this type of interface has been eliminated with the development of interface technology.

2. SATA hard disk (serial port hard disk): now the mainstream, the hard disk of SATA interface is also called serial port hard disk, because it has strong error correction ability, once the error is found, it can be automatically corrected, which greatly improves the security of data transmission. The new SATA uses a differential signal amplified system. This system can effectively filter the noise from the normal signal. The good noise filtering ability makes the SATA operate at a low voltage. Compared with the transmission voltage of parallel ATA up to 5V, the SATA can operate at a higher speed with a peak to peak voltage of 0.5V (500mv). "The more correct statement is: peak to peak 'differential mode voltage'". The transmission speed of SATA is 150MB / s, and that of SATA II is 300MB / s. generally, the speed can reach 7200 rpm.

3. Solid state disk
Solid state disk (SSD) is a kind of computer external storage device with permanent memory [such as flash memory] or non permanent memory [such as synchronous dynamic random access memory (SDRAM)] with a maximum of 500m / s. Solid state drives are used to replace traditional hard disks (HDDs) in laptops. Although there is no disk structure that can be rotated in SSD, according to people's naming convention, this kind of memory is still called "hard disk".In addition, the speed of the SSD interface is very high. 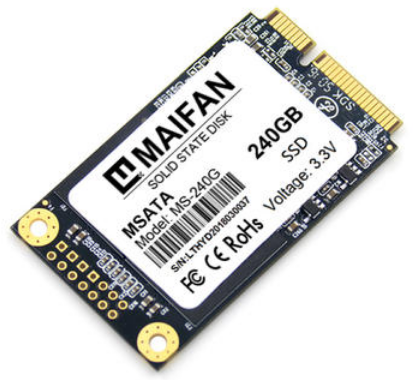 If you have SSD PCB to design and manufacture, you can contact us.