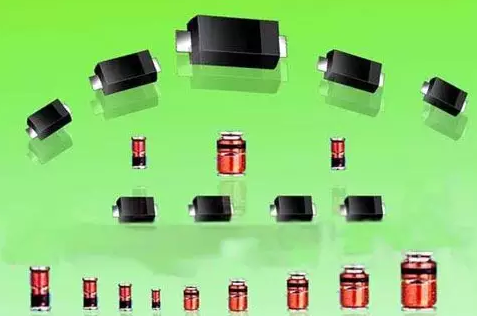 Function and identification method of diode
1. Function
The main characteristic of diode is unidirectional conductivity, that is, under the action of forward voltage, the on resistance is very small, while under the action of reverse voltage, the on resistance is very large or infinite.
Diodes are divided into: crystal diode, bidirectional trigger diode, high frequency varistor diode, varactor diode, generator diode, Schottky diode.
2. Identification method
The identification of diodes is very simple. The N-pole (negative pole) of low-power diode is mostly marked by a color circle in the diode meter. Some diodes also use the special symbol "P" and "n" to determine the polarity of the diode. The positive and negative poles of the light-emitting diode can be identified from the length of the pin. The long pin is positive and the short pin is negative.
3. Test notes
When a digital multimeter is used to support the diode, the red probe is connected to the positive pole of the diode, and the black probe is connected to the negative pole of the diode. At this time, the resistance value measured is the positive conduction resistance of the diode, which is just opposite to the connection method of the pointer multimeter.
4. Fault characteristics
The main faults of diode are open circuit, short circuit and unstable voltage stability. Among the three kinds of faults, the former one shows the rise of power supply voltage; the latter shows that the power supply voltage drops to zero voltage or the output is unstable.


Test method of diode
I. Detection of low power crystal diode
A. Distinguishing positive and negative electrodes
(a) Observe the symbol marks on the housing. Usually, the symbol of diode is marked on the shell of diode. One end with triangle arrow is positive and the other is negative.
(b) Observe the color spots on the shell. On the case of a point contact diode, it is usually marked with a polar color dot (white or red). Generally, the end marked with color dots is the positive pole. Some diodes are labeled with colored rings, and the end of the colored rings is negative.
(c) Based on a measurement with a smaller resistance, the black lead is connected to the positive end, and the red lead is connected to the negative pole.
B. Detect the maximum reverse breakdown voltage. For alternating current, the maximum reverse operating voltage, which is the peak AC voltage to which the diode is subjected, is constantly changing.
II. Detection of bidirectional trigger diode
Put the multimeter in the corresponding DC voltage position. The test voltage is provided by the megohmmeter. During the test, shake the megohmmeter and measure the VBR value in the same way. The smaller the difference between the absolute values of VBO and VBR indicates that the better the symmetry of bidirectional trigger diode is.
III. Detection of transient voltage suppression diode (TVS)
To measure the quality of the tube with a multimeter, the forward and reverse resistance of TVs with single main pole can be measured according to the method of measuring common diode. Generally, the forward resistance is about 4K Ω, and the reverse resistance is infinite.
For TVs with two-way poles, the resistance between the two pins measured by changing the red and black lead at will should be infinite. Otherwise, it indicates that the performance of the tube is poor or has been damaged.
IV. Detection of high frequency varistor diode
The difference between positive and negative high-frequency varistor diode and common diode in appearance is that the color of common diode is black, while that of high-frequency variable resistance diode is light. The polarity law of the diode is similar to that of the ordinary diode, that is, the end with green ring is the negative pole, and the end without green ring is the positive pole.
V. Detection of varactor diode
The resistance between the two pins of the varactor diode should be infinite. If the pointer of the multimeter swings slightly to the right or the resistance value is zero during the measurement, it indicates that the measured varactor diode has leakage fault or has broken down.


VI. Detection of monochromatic LED
An energy-saving 1.5V dry battery is attached outside the multimeter, and the multimeter is set at R × 10 or R × 100 gear. This kind of connection is equivalent to adding 1.5V voltage to the multimeter in series, increasing the detection voltage to 3V (the turn-on voltage of LED is 2V). During the detection, use the two probes of the multimeter to rotate the two pins that contact the LED. If the performance of the tube is good, it must be able to emit light normally once. At this time, the black lead is connected to the positive electrode, and the red lead is connected to the negative electrode.
VII. Detection of infrared LED
A. The positive and negative electrodes of infrared light emitting diodes are distinguished. Infrared light emitting diodes
The transistor has two pins, usually the long pin is positive and the short pin is negative. Because the infrared light-emitting diode is transparent, the electrode in the shell is clearly visible. The wider and larger inner electrode is the negative electrode, and the narrower and smaller one is the positive electrode.
B. First measure the forward and reverse resistance of red LEDs. Generally, the forward resistance should be about 30K, and the reverse resistance should be more than 500K, so that the tube can be used normally.
VIII. Detection of infrared receiving diode
A. Identify pin polarity
(a) Identify from the appearance. The common infrared receiving diode is black in appearance. When identifying the pin, facing the light window, from left to right, they are positive and negative respectively. In addition, there is a small inclined plane at the top of the tube body of the infrared receiving diode. Usually, the pin with the inclined plane is the negative pole, and the other end is the positive pole.
(b) First use a multimeter to distinguish the positive and negative electrodes of ordinary diodes for inspection, that is, exchange the red and black lead twice to measure the resistance between the two pins of the tube. Under normal conditions, the resistance value obtained should be one large and one small. According to the lower resistance, the foot of the red probe is the negative pole, and the pin of the black probe is the positive pole.
B. The detection performance is good or bad. The forward and reverse resistances of infrared receiving diodes are measured by the resistance block of multimeter. According to the values of forward and reverse resistances, the quality of infrared receiving diodes can be preliminarily judged.
IX. Detection of laser diode
According to the method of detecting the forward and reverse resistance of common diode, the pin arrangement order of laser diode can be determined. However, it should be noted that the forward voltage drop of the laser diode is larger than that of the ordinary diode, so when detecting the forward resistance, the pointer of the multimeter slightly deflects to the right.