A brief history of flexible PCB technology! Don’t you want to know about it?

FPC began in the 1950s, and the representative technologies that have appeared so far are as follows.

(1) In 1953, DuPont applied for a polyimide patent (patent number: us2710853a) to protect polyimide resin, its film and pipe (in 1960s, DuPont’s polyimide film (Kapton), Vespel and pyre ml) were commercialized one after another).
(2) In 1960, V. dahlgreen invented the process of bonding metal foil on thermoplastic film to make circuit patterns, which is the beginning of flexible PCB products.
(3) In 1969, Philips of the Netherlands developed FPC (fd-r) made of polyimide.
(4) In 1977, American g. J. Taylor put forward the concept of multilayer rigid flexible PCB.
(5) In 1984, Kaneka developed a polyimide film product (apical).
(6) Akzo developed two-layer adhesive (FCCL) in the late 1980s.
(7) In the latter half of 1990s, new varieties of FCCL with high dimensional stability, low moisture absorption, high heat resistance and high bending property were successfully developed, such as DuPont’s Kapton VN, en, Kaneka’s apical NP, apical HP, etc.
(8) In the latter half of 1990s, tab (tape automated bonding) and COF (chip on FPC) began to be applied.
(9) In the late 1990s, roll to roll or reel to reel (RTR) appeared in Japan, Europe and America.
(10) In 2002, Nichi developed the rolled copper alloy foil (nkl20) with high mechanical strength.
(11) At the beginning of the 21st century, new types of FCCL substrates appear, such as liquid crystal, which is made of thermoplastic resins such as PEEK Polymer (abbreviated as LCP), ultra-low dielectric constant porous polyimide film substrate, pen film substrate, rolled Rf-4 copper clad laminate (thickness less than 50 μ m), aramid fiber extremely thin substrate (thickness 35 μ m), etc.
(12) From 2003 to 2004, Mitsui metal and Foton metal developed new electrolytic copper foils with low profile and high bending property for flex PCB.
(13) New technologies and products emerged in the past decade include:
A. Ultra fine line, line width / spacing up to 15 / 15 μ m, as shown in the figure below 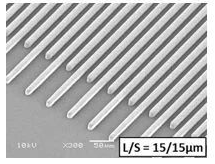 B. High difficulty rigid Flex PCB, rigid PCB area adopts any layer technology, as shown in the figure below

C. Multilayer FPC of embedded components is shown in the figure below

H. In 2018, the FPC mass production of MPI material (modified PI, formula has been improved), and the performance comparison with LCP is shown in the figure below (but the performance is worse than LCP in low impedance). It is mainly used in high frequency below 15GHz.

It is worth mentioning that, compared with other types of PCB (even high-end HDI and IC packages substrates), the manufacturing of flexible PCB is greatly affected by the substrate (such as FCCL) (for other types of PCB, the manufacturing process is more important). It can be said that the substrate affects the development direction of FPC to a great extent (such as LCP and MPI mentioned above).